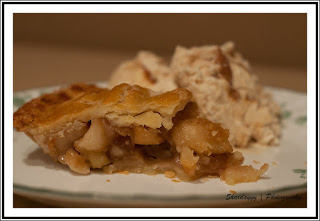 Tagline: When Judy goes apple picking, she gets more than she bargained for when she runs into an old flame.

Observations: You can't choose a more fall-inspired activity than apple picking, which is a personal bucket list item. I really enjoyed the part where they were recalling how they'd known each other in college. (For the record, I would give apple pie and peanut butter ice cream a try. It sounds good!)

I wasn't crazy about him touching her chin and turning her face toward him. That seemed too intimate, considering they hadn't seen each other for many years and even then, they were customer and pie girl.

I loved the surprise that they'd been set up. I've mentioned before that I'm difficult to surprise and this author accomplished it! (If you're a Great British Baking Show fan, you'll understand when I say I feel a little like surprising me is this blog's equivalent of the Paul Hollywood handshake. LOL)

However, I did feel a moment of confusion when I wondered how the daughter could have known they were acquainted in college. It seems unlikely that either Richard or Judy would have mentioned each other to her. Then I thought okay, it was just a coincidence. The daughter had no foreknowledge that her boss and her mother had known each other. She was just playing matchmaker, which is fine, but I did have that moment where I questioned things and that might be on me and my analytic mind. What was your experience with this story? Tell me in the comments!

Hey Kate!
I had the same reaction to the chin touch/head turn thing. Too much too soon. Overall I enjoyed the story, but wish Judy had spoken aloud a little more.

Kate, I didn't have a problem with the chin touching when I first read the story, I chalked it up to her having a positive past with him. However, now that you brought it up I tend to agree with you probably because of the climate of today's society. Funny the things a writer can get by you when you are pulled into the story.

Well, this story made me hungry for pie! It was a cute story, and I also thought touching her chin might be a bit much. I think it was just a coincidence they had already known each other when the daughter set them up. I bet she was surprised! It was a great fall themed story.

Every week I analyze the romance stories and post my observations and personal opinions. I think you'll get the most out of it if you have a copy of the story to refer to, but people outside of the U.S. have told me that they still find the blog helpful even though they can't get the magazine where they live.